Watch Edited Version of Biden's Hate Speech that Exposes the His Lies with the TRUTH!

Please Share with Family and Friends and fellow Patriots! 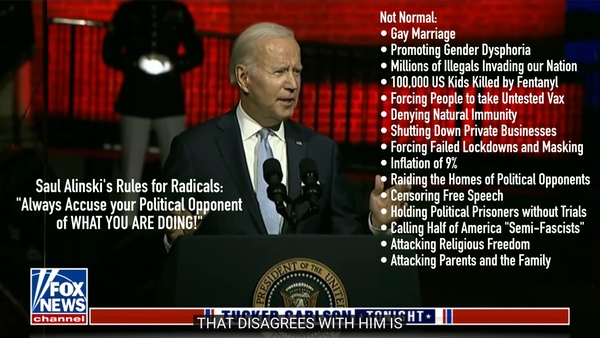 Be sure to Watch each Week's Edition of the We the People Convention News & Opinion Podcast posted Every Saturday around Noon!


Not sure who was checking credentials at the door, but President Joe Biden's handlers must have missed one of those dirty rotten "MAGA Republicans" walking in to hear his speech Thursday night.

During a rambling monologue that included no shortage of comments bashing Trump voters and conservatives as violent, democracy-killing criminals, Biden, speaking at Independence Hall in Philadelphia, found himself being heckled mercilessly by one guy in the back shouting, "Let's Go Brandon!"

Which, as we all know by now, is a popular euphemism for "f*** Joe Biden."


Now, we can all debate the ethics of screaming profanity, or even code for profanity, at a sitting U.S. president - even one who just spent much of a speech slamming his fellow right-leaning citizens as hateful, lie-spewing bigots.

But one thing isn't up for debate: a large number of Americans - most, if polls are to be believed - sure aren't fans of Brandon.