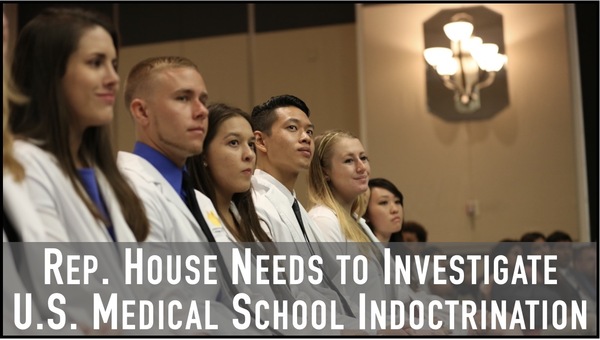 The next generation of America’s top doctors could be more concerned about a patient’s race than previous generations.

CriticalRace.org, which monitors critical race theory (CRT) curricula and training in higher education, has expanded its Medical School Database and found that 58 of the nation’s top 100 medical schools have some form of mandatory student training or courseworkrelated to the polarizing idea that racism is systemic in America's institutions.

At least 58 of America’s 100 most prestigious medical colleges and universities have some form of mandatory student training of coursework on ideas related to critical race theory (CRT), according to CriticalRace.org.


Earlier this year, the group uncovered that 23 of the 25 most prestigious medical colleges and universities have some form of mandatory CRT-related student training or coursework. CriticalRace.org expanded the study and found that 46 of the top 100 medical schools have offered materials by authors Robin DiAngelo or Ibram Kendi, whose books explicitly call for discrimination, according to Jacobson.

"Approaching the doctor-patient relationship through a Critical Race lens is being implemented under the umbrella of 'Diversity, Equity, and Inclusion' and other euphemisms, such as Ibram Kendi's 'anti-racism' approach. 'White privilege' and similar concepts, pushed by Robin DeAngelo and others, are being infused into the medical school culture," he said.

The schools examined were based on the rankings by U.S. News’ rankings of America’s top medical schools. The study also found that 38 of the top 100 medical schools have some sort of mandatory CRT-related training for faculty and staff.

CriticalRace.org details the exact curricula and trainings at each school, along with contact information and an overview of every university.

"A patient-centric ethos is being drowned out by politics and activism," Jacobson said, adding that CRT being pushed on medical students is particularly alarming even compared to other areas of higher learning.

Click Here to Signup to Get Emails and/or Text Messages from We the People Convention!

"Because there are only just over 150 accredited medical schools in the U.S., and they are so hard to get into, students really have no options. Unlike universities and colleges, where students may be able to avoid a race-obsessed campus climate, with medical schools students have to submit to race-focused medical education or give up their career hopes," Jacobson said.

"We have analyzed CRT-related training in colleges and universities and elite private K-12. As bad as those institutions have become, things are much worse in medical schools because the stakes are so high. Patient care and people's lives are at risk when doctors and medical providers view patients as proxies for racial or ethnic groups in sociological and political battles," he continued. "Every person has the right to be treated equally as an individual, based on his or her medical condition, without societal racial politics influencing treatment. Yet increasingly we see the medical establishment, including the American Medical Association, demanding that medical students and physicians become race-focused activists."

The subjects of mandatory training and coursework are worded and phrased differently at individual schools, but use terms including "anti-racism," "cultural competency," "equity," "implicit bias," "DEI – diversity, equity and inclusion" and critical race theory, according to CriticalRace.org.

For example, the study found that Lewis Katz School of Medicine at Temple University’s Department of Surgery will "assess and improve upon the current state of surgical trainee evaluation to eliminate the impact of implicit and explicit bias."

University of Missouri-Columbia School of Medicine pushes incoming students to participate in "the Common Read Program to learn more about racial biases in medicine," according to the study. The University of Illinois College of Medicine has a "Medical School Curriculum" subcommittee which will "plan the summer anti-racism reading/discussion group for incoming students and plan roll out across all phases" and "focus on reviewing the current curriculum content in all phases to remove biases and inaccuracies, identify deficiencies/omission… and to continue to incorporate the social determinants of health into the materials being taught," the study found.

But these are only a small sample of the plethora of examples found by CriticalRace.org.

CriticalRace.org previously found that at least 236 colleges or universities of 500 examined have some form of mandatory student training or coursework on ideas related to CRT. Defenses of CRT-associated materials have ranged from outright denying CRT is being taught, to claiming that the underlying ideas are key to creating an inclusive educational environment.

CriticalRace.org is a project of the Legal Insurrection Foundation, a non-profit devoted to campus free speech and academic freedom.