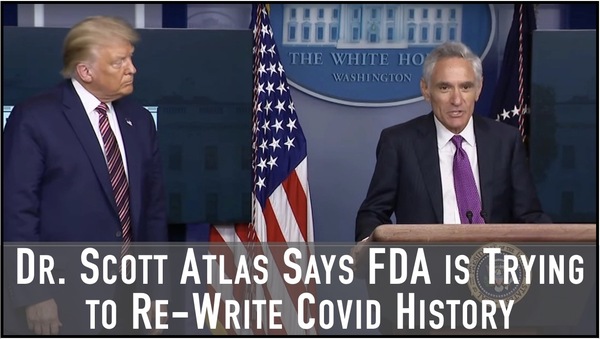 
Boyden Gray & Associates filed a lawsuit in June on behalf of three doctors who allege that the U.S. Food and Drug Administration (FDA) illegally interfered with their doctor–patient relationships, resulting in harm. They also claim that the FDA broke the law when the agency issued statements prohibiting the use of ivermectin to treat COVID-19.

In response to the lawsuit, lawyers for the FDA claimed that its guidance for people to “stop” taking ivermectin for COVID-19 was informal and just a recommendation; as such, they weren’t mandating against it.

However, in an interview that aired on NTD’s “Newsmakers” on Nov. 23, Dr. Scott Atlas, a senior fellow in health care policy at the Hoover Institution at Stanford University, confirmed that the FDA did, indeed, take an “unprecedented” approach against ivermectin and said that their defense amounts to the FDA trying to rewrite COVID-19 history.

“This is unprecedented, frankly, in my 30 years as a doctor, where the use of an FDA-approved drug was somehow forbidden if you used it for off-label,” Atlas stated. “In the United States, that’s standard of care.”

READ: Ohio Bill Aims to Permit Use of Ivermectin and Alternative COVID-19 Drugs

The standard of care, Atlas explained, is that once the FDA approves a drug, doctors are allowed to use the drug to treat other conditions.

Atlas added that ivermectin was approved by the FDA and was found to be “so safe” that “billions of doses have been given.” He said that ivermectin is available over the counter in many countries without a doctor’s prescription.

“This was really a shocking interference of the ability of a doctor to do his job,” Atlas said.

When asked why the FDA was attempting to rewrite history by stating that its guidance against ivermectin was a recommendation only, Atlas said that the rewrite on ivermectin is just the beginning.

“What we’re seeing is a complete Orwellian rewrite of all kinds of things during this pandemic,” Atlas told NTD. “Many colleagues of mine were always saying the truth will prevail. And once the truth comes out, that some of these drugs were either useful or safe …  there’s a lot of ‘cover your behind.’”

Atlas then alleged that the FDA didn’t just forbid ivermectin. Instead, its language was such that pharmacists and pharmacies refused to fill prescriptions from doctors. Such a stance was “really unprecedented,” Atlas said.

Further, Atlas said, there’s an overall “Orwellian rewrite of what the advice was on a bigger picture.”

Circling back to ivermectin, Atlas said the FDA’s prohibiting its off-label use to treat COVID-19 was “one of the bigger failures of the [National Institutes of Health (NIH)].”

“The NIH could have done definitive clinical trials in the Spring of 2020. Instead, they blocked those trials; they made people afraid of those drugs, so that even when trials were attempted, patients were not willing to enter into those trials,” he said.

Atlas then stated unequivocally that the position taken by the NIH and the FDA was an unethical abuse of public health.

Plaintiffs in the case against the FDA include Dr. Robert Apter, Dr. Mary Talley Bowden, and Dr. Paul Marik. Lawyers for the plaintiffs allege that the FDA violated the Federal Food, Drug, and Cosmetic Act and the Administrative Procedure Act.

The lawyers also noted that if the court doesn’t rule against the FDA violating its statutory lane and unlawful actions, the FDA will continue to interfere with the practice of medicine.

“Depending on the outcome of these, there will either be a real chilling of what doctors can say and do for patients—complete interference, in a doctor’s ability to help a patient! Or, if the lawsuits go the other way, we will hopefully see a restoration of freedom of medical practice.”

CLICK HERE TO READ MORE OF THIS ARTICLE AT THE EPOCH TIME.COM