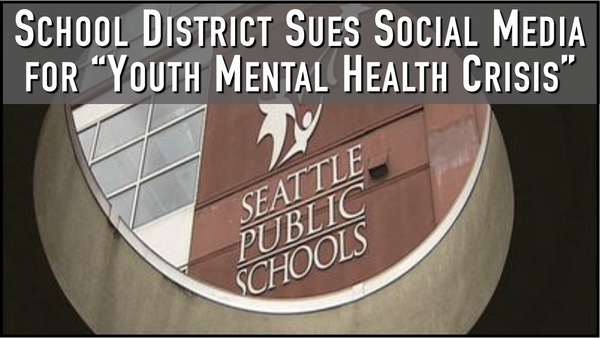 The school district's goal is to have the court order social media companies to pay for prevention education and treatment for toxic use of social media.

The Seattle Public School District has filed a lawsuit against the owners of such social media platforms such as TikTok, Instagram and Facebook, alleging they are contributing to the mental health crisis among young people.

The 91-page-lawsuit, filed Friday in a U.S. District Court, argues the platforms have "created a public nuisance by targeting their products to children," NPR reports.


The novel case also argues the platforms contribute to cyberbullying and self-harm and have negatively affected students' overall performance in school.

"Defendants have successfully exploited the vulnerable brains of youth, hooking tens of millions of students across the country into positive feedback loops of excessive use and abuse of Defendants' social media platforms," the lawsuit reads. "Worse, the content Defendants curate and direct to youth is too often harmful and exploitive."

Section 230 of the Communications Decency Act shields online companies from liability for what third-party users post, but the lawsuit argues that this provision doesn't apply in this circumstance.

"Plaintiff is not alleging Defendants are liable for what third-parties have said on Defendants' platforms but, rather, for Defendants' own conduct," the lawsuit continues. "Defendants affirmatively recommend and promote harmful content to youth, such as pro-anorexia and eating disorder content."

The school district's goal is to have the court order social media companies to pay for prevention education and treatment for toxic use of social media.

CLICK HERE TO READ MORE NEWS AT JUST THE NEWS.COM